We just entered April. The colorful flowers of the trees decorate the parks and gardens and fascinate us. If you go to the Nezahat Gökyiğit Botanic Garden or the Japanese park, you will see trees that are easily separated from each tree and with their pink blossoms that blink at you shyly. These trees came to Turkey as a very remote gift. Except for our country and its motherland, they exist only in 8 countries. These are Japan’s fruitless famous cherry trees, Sakura.

Sakura trees are an important part of Japanese culture and Samurai lifestyle. Trees flowering in late March or April are the harbinger of spring in Japan. Sakura can only stay in the branch for a short time. The flowers don’t fall by fading, while they still haven’t lost their vitality and beauty, they’re all over the place. You may now ask what this has to do with Samurai. The tree figure represents the perfect beauty in Japanese culture in general, and also the rapid, painless death. It’s really interesting that these two opposite concepts are assembled in a single icon, isn’t it? Wait a little longer, something deeper is yet to come.

When we get to a more specific understanding, sakura flowers remind the samurai of the possible death and the passing of life at any moment in the war, as they have fallen from their branches in a very short period of time. After a short period of two or three weeks in the spring when nature renewed itself, who wanted to open it up for a long time, these pink flowers, which were still floating in the air, were still in the beauty of cutting the breath of man, mean life and sudden death for the Japanese. In short, sakura flowers represent the life cycle in Japanese culture. 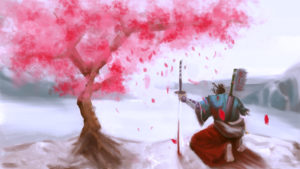 The time when the Sakura blossoms are now considered sacred in Japan, and this is the time when the country accepts the most tourists. So much that after the weather is given a Sakura forecast. Many days and events that are important for the Japanese people, such as wedding ceremonies, are trying to be brought to the time of the Sakura. Sakura Zensen is the name given to the festival celebrated in 11 cities, which lasts two to three weeks. For meteorologists, it’s very important to have them set up when, in a way, Sakura starts to blossom. 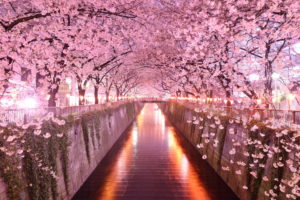 Although we call the period starting at the end of March and continuing until the end of May spring, we have a name other than Haru (spring) for the Japanese in this period: Hanami. It is a name given in honor of specifically this flower. In hanami times, which literally means “watching flowers” in English (hana= flower, mi= to watch, see), Japanese people and tourists from all over the world come to parks, gardens, and temples just to watch short life of thousands of tiny pink flowers on sakura trees.

Naturally, it isn’t surprising that at this time the country receives the most tourists. But they shouldn’t be judged either, the resulting landscape is really eye-catching. In my opinion, especially at night, one feels itself in a completely different place while watching the trees. By the way, hanami means visits only in the morning, and evening visits have a separate name: yozakura.

When the flowers begin to fall, the pink clouds descend over the roads and rivers and cover them like blankets. You can often see these scenes in Animes, as you will read in my next article. 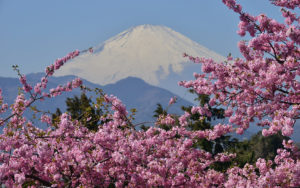 One day, if you have a chance to go to the parks I’ve mentioned or to Japan, at the right time that is, look carefully at Sakura trees. They are not just a tree species, there are at least 200 different types of Sakura. It’s a culture. A philosophy of life. It’s the life cycle itself. It’s what decorated the planes of the Japanese called kamikaze During World War II. The pilots who died at that time would be reincarnated, just like themselves, wanting to grow for a long time, surviving for a short time, flowers that break out of life without losing their beauty in the spring of their lives.

This is the first article by an upcoming series about Japan for 9 Magazine by our guest writer Uzay Koldemir . Uzay also has an article on our website about artificial intelligence which is Artificial Intelligence: Where Is It Taking The Original One?

The not so Kawaii Side of Japan’s Harajuku Culture