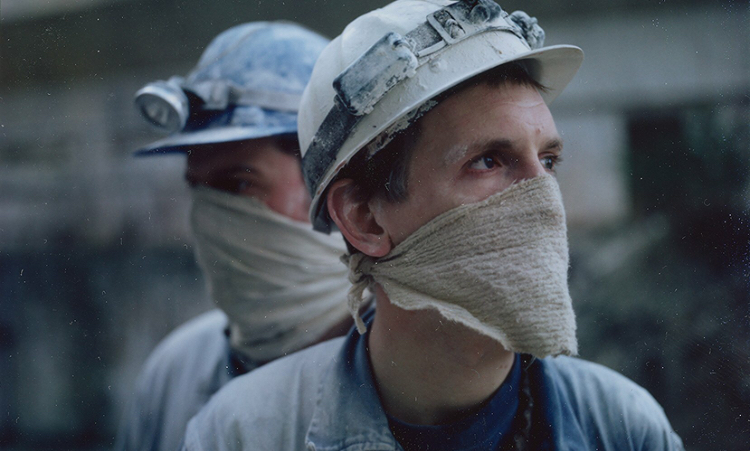 Two brothers in a remote town with freezing weather.

“Winter Brothers”(Vinter Brødre), directed by Hylnur Pálmason, is a film about two brothers working in a mine and the conflict between them caused by the lack of love. The story mostly focuses on Emil, the younger brother, who is a lonely person who hasn’t tasted love.The film reflects the lack of love and the hard conditions which people face very well.

It was shown in the 37th Istanbul Film Festival and it is included in the International Competition. During the past days, we had the chance to ask a few questions to Elliot Crosset Hove, the actor who portrays the main character Emil.

How did you get involved in the film?

I got involved in the film because of the director. We knew each other. I was in the director’s short film before this film. So we knew each other and he wanted to extend the collaboration. Then he needed someone for this film and he chose me and that was really nice because it was so much fun to be in the film. He is a very interesting and a wonderful director so it is a pleasure to work with him.

How’s your relationship with other actors and the film crew?

I have a fun relationship with one of the actors who plays the old man in the beginning of the film with the beard, a little crazy man living in the litter shack. The actor playing that role is my father in real life, who is also an actor, so that was a fun relationship. Otherwise I have gone to the same theatre school as most of the actors. The crew were just really, really nice. We became a big family because the production was very intense and very hard. So we became very close and I think that was good for the film.

Where did you go to theatre school?

I was educated in the National Danish Theatre School in Copenhagen, I was there for four years and that was a very nice school.

Where did you shoot the film?

We shot it in a town called Faxe, one hour south of Copenhagen. It has this very large chalk valley that has this white chalk.

How long did it take to shoot the film?

We shot for six weeks and were living at location, so we were always very close to each other and rearrange the days. If it was snowing outside they would do certain scenes instead.

What is your opinion about the soldiers being involved in the film?

I think it is really interesting that this soldier segment is in the film. I know it was something very important for the director and I think it to show a part of the main character because he gets very fascinated by this weapon and by this video with the soldiers. You can say that the essence of soldiers and weapons is violence and aggression. For me it is something to do with that. This character also has the violence and aggression in him and he is, in some way, attracted to it.

Which event do you think was the most important part of the film?

I think in a way that the most important part of the film could be the fighting sequence between the two brothers because, for me, it shows the essence of the film, the aggression of not being loved and also wanting to be loved. Their fighting scene for me is almost like a love making scene in a way. They also show in that scene how much they love each other but, they can’t really show it and I think that’s, not being able to express yourself, is the essence of the film. So I think that scene could be like a key scene in the film.

To what extend does the film resemble real life?

I think the resemblance between real life and this film is not very close, actually. Some places is Denmark has this working environment but, I think it has this magic realism. For me it is more of a thought or a dream of the director than real life.

What role does love play in the film?

I think love plays the role in the movie that is often absent, at least it is not there clearly. Therefore maybe love becomes very clear because it is definitely a thing that the characters in the film are longing for, especially the Emil character. It is something that he maybe has never experienced that much of unconditional love. So I think the absence of love is a quite big theme of the film.

Zeynep Güngör on New York, Stubbornness, and ‘Hayırlısı be Gülüm’

Let Everyone Love What They Love!