We decided our theme for our third issue to be “freedom“. Freedom’s relationship with many topics affected our decision. Especially, during the period we, as all humans are living in, people lacking freedom in their lives is a problem that needs to be drawn attention to.

The fact that now freedom of speech and freedom of thought are both concerned with freedom of life, portrays the seriousness of the lack of freedom.

Throughout the history governments and religious people have tried to silence artists; this shows that what we face today isn’t surprising. Just like it was in the past, people who resist to certain ideas to be silenced is a problem in modern world. 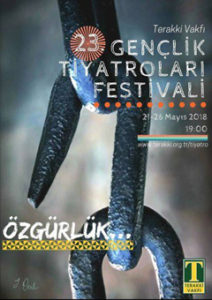 When the situation is like this, the 23rd Gençlik Tiyatro Terakki Vakfı ları Festival caught our attention. The theme of the festival, which took place on 21-26th May at Terakki Vakfı Okulları-Levent, was “freedom”.

This festival, after the disaster of actresses not being permited to act on stage, was an hopeful event for all of us. The festival increasing young people’s interest in art and providing space with freedom is one of the things we wish to see more in our daily lives.