“Eat food. Mostly plants. Not too much”. 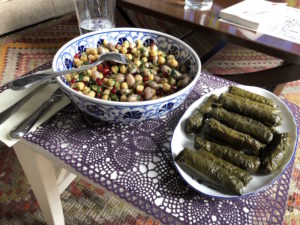 Veganism is getting more and more popular around the world today, especially in younger generations. Being vegan means that you don’t eat and use any products that came from an animal or hurt one in any way. That means that apart from the diet (no meat, eggs, dairy, not even honey) things like animal-tested products and leather are also not allowed.

There are a few main reasons people go vegan.

Some do it as a diet – a form of detox or for health reasons.

One of the most popular reasons is the belief that we don’t have the right to torture animals for food. The meat and dairy industries, in particular, involve a lot of torture, including separating babies as little as a day old away from their mothers and abusing female cows by artificially inseminating them. Some even go as far as to believe that killing animals should be considered as murder.

These weren’t my reasons.

But I’m glad that people are vegan to protect animals – because it reduces their negative impact on the environment. That’s also one of the main concerns today, and why many people are choosing this lifestyle. And that was my reason too. 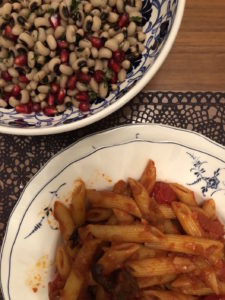 Throughout the month of November, I didn’t eat or drink any products that came from animals. (I accidentally ate something that had a thin layer of egg on it, and who knows, maybe a few other ingredients that I might have missed along the way.) I didn’t focus on other aspects like clothing (no leather, fur etc) since I had bought them some time ago, and replacing them would harm the environment even more. I also didn’t check warnings like “may contain traces of eggs” for allergens, as long as it had a 99% percent chance of being 100% vegan, I was fine.

My journey started in New York, and I’m glad it did. There are vegan options almost everywhere in the city. In my time there, I got to go to a vegan fast-food chain, Eat by Chloe, which made it easier for vegans around the city to have a quick bite or order in. One of my most enjoyable meals was in ‘Candle Cafe,’ a vegetarian-vegan restaurant that offered many cuisines. I was fine in most cafes and restaurants, except the times I went to ones that were a bit more upscale. Once the restaurant was ‘French’ or ‘Italian’ I had to remove some ingredients to make my food vegan. It was frustrating to ask: ‘does this have butter?’ constantly, and I hated that I had to be the annoying, picky person.

Once I was back in Istanbul, I thought I had a challenge awaiting me. Most of my breakfasts were already vegan, and I didn’t consume too much meat or dairy at night (except milk chocolate – oops) but I thought I would have to bring food to school every single day. I did that for a week and a half until I gave it up. What I realized was that there was already enough options for me in the school cafeteria. So that’s how I continued.

Breakfast: some combination of avocado and bread, maybe with tomatoes on top and an apple on the side.

Snacks: Fruit leather (I know, the name is ironic), actual fruit, nuts, or some vegan dessert.

It was easy to adapt at home. Oh, except that one time guests came over and we had fancy cheese and pastırma. That was my weakest moment, but I survived.

Another weak-ish moment was each time we went out to eat. It was rare that I found a meal that’s fully vegan (like the one pictured below) and I always had to slightly alter a meal. I even had a meal where everyone around me got a burger (supposedly the best in the area) and I had pasta, without the cheese and without butter. Fortunately, wherever I went, the waiters and staff were very helpful.

Of course, it isn’t just what I ate that truly made this an experience.

First of all, being vegan brings along questions. Every. Single. Meal. Even if it’s with the same people. And it got boring real quick.

And then there were people who commented on it, mostly by having no information on the vegan diet whatsoever:

“Oh, you’re very moody/constantly angry. It must be because you’re vegan.”

“I understand vegetarian, but why would you go vegan?”

“Why are you vegan? You don’t need to lose weight?!”

“I heard about an old woman who went vegan and died the next day.”

And so on and so forth…

Oh, and I also got teased by my friends a lot, thanks guys. Not serious teasing – but did they have to bring up veganism in every single improv skit we did? (One of them laughed and commented that they “had to.”) 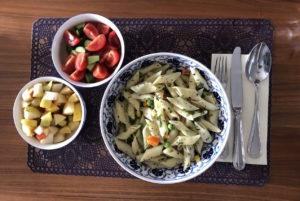 So now I’ll continue by answering some questions:

No, I’m not moody/angry because I’m vegan. I actually did feel a little calmer, but it may be merely psychological.

Why vegan and not vegetarian? Environmentally, there isn’t a huge difference… But the only reason we are getting all that milk is that we are inseminating cows constantly, and artificially, to make more cows. To produce more greenhouse gasses? To cover more land that could be used to plant more seeds that could one day end starvation?

No, I didn’t lose weight. My portions were actually larger than my normal diet. If I eat salad as small as the meat I usually eat, yes, I would starve, but thankfully that wasn’t the case, I’m sure that none of you were expecting it to be.

No, I wasn’t constantly hungry. I was actually pretty full most of the time, compared to average, but that might just be because I was paying attention.

My skin did clear. Well, to be fair, I only had a few small zits to begin with, and ended with one on my forehead, a fellow vegan told me that that was my body getting rid of toxins. And it did go away, leaving me with clear skin.

I wasn’t eating exactly as I used to eat before. I did cut a lot on meat. Especially at home, since it is an easy fix. I learned to appreciate salads and beans, and some nuts.

But I also used being vegan for a month as an excuse to eat not-so-healthy things in upcoming weeks. Which clearly upset my organs but whatever.

Overall I’m glad I did it. I saw that it is doable, and I started paying more attention to what I eat.

I encourage you -yes you, reading this- to rethink your diet to see if everything you eat is really necessary. I am by no means encouraging everyone to go vegan and forget everything else, but most of what we eat is not really worth the negative impact it has on our planet, or on the animals. We don’t need red meat in every single meal.

Everything starts by reducing. And that’s precisely what we have to do. Reduce the dietary impact we have on the planet, one meal at a time. Swap one stake a week to beans. It seems almost too simple – like it doesn’t matter. But it does. Imagine 7.5+ billion people doing that every week.

Update from December 2020: After writing this article, I ate meat a couple of times a week until Fall 2019. At that time, my father decided to go vegan (although he occasionally had meat and dairy) which altered our eating habits at home. I was now eating meat 2-3 times a month but continued consuming dairy at my regular pace. From December to mid-January, I consumed a lot of meat compared to usual, mostly due to a trip to Paris in January where my lunches and dinner consisted of meat. My last day, I had a beef tartar and that was it. That was my last full-meat meal.

I don’t restrict myself, however eating a large amount of meat often upsets my stomach now. I consider myself pescatarian, although I still eat small amounts of meat a couple of times a week. If I want to eat a huge piece, I would allow myself.

I encourage you all to try to go vegan or vegetarian for a couple of weeks or even a month to see how it affects you. We all have a role to play in combatting climate change and emissions from red meat are just not negligible.

Thank you for reading this article on 9 Magazine, if you enjoyed it, I encourage you to check out our website of give us a follow on Instagram!