Almond, soy, rice, flax, cashew, coconut… as I’m standing in the non-dairy isle of Whole Foods, I’m almost overwhelmed at the amount of variation of non-dairy milk. I don’t see what I’m looking for, however, and I can feel myself begin to panic. I need this. The world needs this. Just as I turn to leave, the glistening white wrapper embellished with blue catches my eye like the sunlight in the midst of a storm. I can hear the angels singing. It’s pea milk.

Yes, giggle and make fun, but the arrival of pea milk is a momentous event for milk sustainability.

There are many reasons people have switched from dairy to non-dairy milk, including lactose intolerance, health benefits, and taste, among others. According to a study done by Nielsen in September 2017, the plant-based milk industry has seen a rise of 3.1% in their sales since 2016. Meanwhile, cow’s milk sales went down 5% over the same time frame.

However, the question of sustainability is raised. According to researcher Stefan Unnasch, part of Life Cycle Associates, one liter of cow’s milk produces 1,467 grams of CO2 while a liter of almond milk produces 396 grams of CO2, not to mention water consumption of almonds. 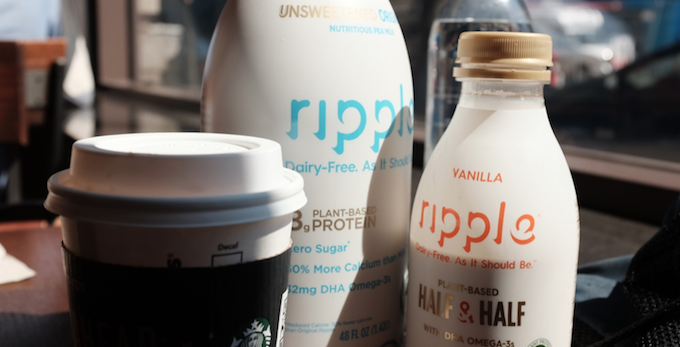 Curious about this issue, I did a quick Google search on the most sustainable milk. The results varied from almond milk to oat milk, then cashew milk. What caught my eye was pea milk, a milk that first hit stores in 2015 and apparently is the eco-friendliest of them all. I had to try it. This was the beginning of my hunt for pea milk.

Interested in learning more, I contacted the number listed on their website, ripplefoods.com, and was met by Sophie, a representative from consumer response. When asked how the idea of pea milk first came about, she replied with, “The two founders, Adam Lowry and Neil Menninger, were trying to find other sources of protein and realized that yellow split peas are a very good source… looking for an alternative to dairy because it’s not ideal in the long run for the environment.”

The environment and sustainability is a strong selling point for pea milk. As advertised on their website, “Unlike almonds, which require irrigation; or cattle, which contribute to deforestation and greenhouse gas emissions; peas have a small environmental footprint.” Ripple says that a gallon of cow’s milk produces 17.6 pounds of CO2 emissions while a pound of almonds produces 1.6 pounds of CO2 emissions and a pound of peas produce less than 1/3 of a pound.

Peas also seem to come out on top of many nutritional aspects in comparison to other kinds of milk. While most non-dairy milk such as almond, cashew, and coconut milk carry little to no protein, pea milk contains 8 grams of protein, the same as dairy milk. It also contains less sugar and less saturated fats than both dairy and dairy-alternatives, as stated in the Ripple website.

The closest Whole Foods to me is 1.2 miles away so I take the subway all the way there and prayed that my trip would be worth it; And there it was, amongst rows of nut milk and creamers: pea milk.

I bought a 48 oz. (1.42 L) bottle of their “unsweetened original nutritious pea milk,” as their label puts it. It’s reasonably expensive with its $5.39 price tag at Whole Foods compared to the average price ($1.93) of half a gallon of milk in the U.S.

However, as far as taste goes, it tastes surprisingly similar to milk. There almost is no flavor, only a smooth texture, and an earthy aftertaste but it definitely is nothing like what comes to mind when thinking about peas. The milk is not green, it’s tinted yellow and it definitely does not taste like peas and is creamier than most non-dairy milk. I asked a few other people to try it and got mixed results.

Emine Taha, from Istanbul, says, “I think pea milk, it definitely has a strong taste but it’s not bad and it tastes like milk, like some kind of milk… I wish they had it in Istanbul.” Meanwhile, after tasting it, Samantha Sinensky, in between gags, said, “This is disgusting, oh my god… I don’t like it… I’m gagging right now,” adding, “It is definitely not something that I would want to dip a cookie in.”

There was speculation surrounding their sustainability as in an interview in 2016, co-founder Neil Renninger revealed that they were sourcing their peas from France, which, considering the distance, does not follow their eco-friendly code. However, on their website today, it states that their peas are sourced from Canada and the U.S. Midwest (North America). This was cleared up after talking to Sophie and she explained that “That was a long time ago.” The change of pea sourcing from France to North America happened in, “maybe early 2017,” although she “couldn’t say exactly.”

When asked whether she thought that pea milk would be the milk of the future, as the world searches for more sustainable options, she said, “I think it’s going to be one of the options at least… I don’t think [Adam Lowry and Neil Renninger] necessarily believe it begins and ends with pea milk. I think they are open to discovering all kinds of things and this is just the beginning for them.”

So maybe this isn’t the final solution for milk sustainability, but in the future, when I’m standing in the non-dairy aisle of Whole Foods, I’ll be keeping an eye out for any new, sustainable kinds of milk whether that comes in the form of peas or something else entirely.

This article was written by guest writer Amanda Kangsadjaja, this is her first article for 9 Magazine.