Imagine you’ve been chosen to participate in a game show. It’s called “Let’s Make a Deal” and it gives you the chance to win a brand-new Ferrari. Of course, there is a catch. You will have to choose between three closed doors behind which the Ferrari is hidden. The game itself is ridiculously simple for it is nothing more than a game of chance. It is not so much up to the talent of the contestant but rather to probability itself. What makes this game so special though is the question it forces the contestant to ask themselves: Is their choice but a random one or is it possible to use math to manipulate the outcome and the chances of winning?

The host of our theoretical gameshow from which the Problem derives its name is called Monty Hall. He shows the contestant three closed doors in the center of the room. Behind one of the doors is the gleaming red Ferrari and behind each of the other two is a goat.

Only Monty Hall knows what is behind each door.

The game is played as follows: The game show host asks you to randomly pick one of the three doors. You do. Then, leaving your door untouched, he opens one of the doors which he knows has a goat behind it. With two closed doors remaining he asks you if you would like to stick with your first choice or switch to the other closed door. You only have one chance to find the Ferrari otherwise you’ll leave with a goat.

At this point, most theoretical contestants as well as readers who are coming across this problem for the first time become quite puzzled. It is very important to understand the question before you can understand the answer. After Monty opens a door with a goat there are two closed doors left. Behind one is another goat and behind the other is the grand prize. So, should you stick with your first choice or change your initial decision and switch. And how in the world would it make a difference?

Before answering these questions its best to talk a little bit about the history of the Monty Hall Problem.

It was first introduced by a biostatistician named Steve Selvin in his 1975 letter to the journal “The American Statistician”. Initially, the Problem didn’t receive much attention until 1990 when it reappeared in Parade Magazine in a special weekly column called “Ask Marilyn”. What was significantly special about this column was the fact that the “Marilyn” being referred to was Marilyn Vos Savant, the World Record holder for highest IQ at the time.

As a result of Savant’s answer, the Problems fame only increased when nearly 10000 readers of Parade, almost 1000 of which had PHDs, wrote letters claiming her answer was wrong. Among these readers was even renowned mathematician Paul Erdos, who remained unconvinced of the solution until he was shown a simulation demonstrating the result.

At first glance, it seems the contestant’s choice doesn’t matter. Since one of the doors with a goat is opened by Monty Hall your chances of winning are 1/2 and it makes no difference if you stay or switch. With this point of view, it’s easy to understand why so many people believed the question was wrong. Of course, it isn’t.

The answer to Monty Hall’s question is that it is always in your best interest to switch and choose the other closed door. Why? 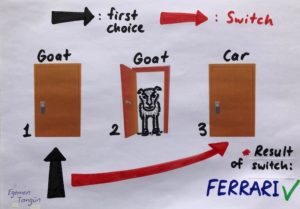 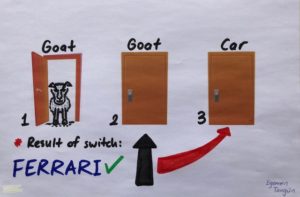 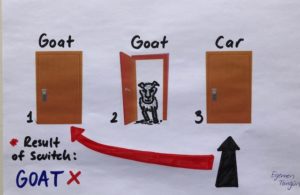 Of course, it can be debated whether the problem is true to reality or not. Since you only have one chance it is always possible to be unlucky and get a goat despite switching. Nevertheless, switching will always allow you to manipulate your chances of winning.

This problem is a type of veridical paradox meaning the solution appears to be wrong but is mathematically correct and provable.

The Monty Hall Problem is truly a great example of thought-provoking math and despite coming across as confusing it is a fun challenge to understand how it works.

This article is written by guest writer Egemen Tangün, a trilingual origami aficionado and an avid debater in his schools MUN club. This is his first article for 9 Magazine.