Niccolò Machiavelli didn’t want to give up politics even after being tortured and banned from office for eternity. 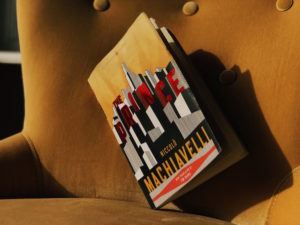 Niccolò Machiavelli, born in 1469 in Florence into an aristocratic family, didn’t have a rough life in the beginning. He completed his education thanks to private tutors and became a diplomat in his twenties.

At this point, it’s important to take a look at Italy’s political climate: first of all, Italy was made up of smaller republics: Florence, Venice, Rome, and so on. The Medici family had lost power in Florence around the same time Machiavelli became a diplomat.

Unfortunately after 14 years in various government positions, as the Medici’s rose back to power thanks to Pope Julius, the inexperienced army Machiavelli helped create failed, and Machiavelli was imprisoned and tortured for 22 days for plotting against the Medici’s, he denied all claims, was released but banned from political life and spent the rest of his life in the outskirts of Florence.

He didn’t enjoy his “retirement” at all. He had to work in politics, that was the only way he truly felt successful. In some way, retiring was torture as well. So Machiavelli made a plan to get back into office.

He wrote a book to Lorenzo de Medici, the ruler of Florence at the time. This book was a short-ish guide on how to rule, a unique gift idea indeed. It was called “Il Principe” (The Prince) and the goal was to strengthen ties with the Medici family, remove any tension, and possibly get offered a position in the government.

The book, although short, covers a lot. It starts by talking about different states and what to do to conquer them, but the second half of the book focuses on more philosophical questions: Is it better to be feared or to be loved? What should a ruler do to win respect? What is the role of luck in human affairs? How can a ruler avoid being hated?

Unfortunately, the door for him to get back into politics was long shut. Although he might have slid “The Prince” from under the door, we have no evidence that Medici ever read it. The door stayed shut, Machiavelli didn’t get the job. He is said to have considered his life a failure, he spent the rest of it thinking about politics and writing about it. Oh, he also was considered a womanizer and wrote a few plays. Fun times for most, torture for Machiavelli as he wasn’t part of the government.

But his attempt to open the door, “The Prince,” is the reason why many people know his name today. While trying to open that door, Machiavelli didn’t realize that he had actually created the key that opens the gates of being a part of history.

Machiavelli’s ideology and views on politics, mainly made famous thanks to his most famous book, The Prince, is controversial. The problem is a lot of what he is writing upset many people since it was almost completely the opposite of what was believed at the time. For example, Machiavelli preferred to separate being a good human being and a good leader, which was against the church’s beliefs. There are many more examples leading up to the Pope banning The Prince in 1559, along with the rest of Machiavelli’s writing.

He believed that loving a leader and fearing them at the same time is a fantasy, and a leader must choose being feared over being loved, while also avoiding being hated.

He also believed that a ruler should use religion to their advantage, appear loyal, charitable, honest, and humane. This doesn’t mean that a ruler has to be a religious doner who can’t tell a lie. It just means that they should appear to be these things – “everyone sees what you seem to be, few have experience of who you really are.”

Probably his most famous idea and the most discussed is that the end justifies the means, although he never said this directly, Machiavelli implied it throughout many of his books. He believed that as long as you try to reach a goal, the “cruelty” of what you do to reach the goal, like lying to the public, does not really matter.

Today, whether you consider him diabolical or a genius, Machiavelli’s ideas are known and they are considered the base of political philosophy. Which is a pretty big achievement if you ask me.

So go on, take a chance. It might be a long shot and might not get you where you want to be but it’s much better than sitting around doing nothing, waiting for the next “opportunity” to come along. YOU create your own opportunities and you alone. So create them or live a bland, meaningless life. Up to you. Just know that creating opportunities for yourself works out one way or another.

Nihon's Japanese Works: Sakura, The Cycle Of Life, The Death Itself