LISBON has become increasingly popular in recent years. We do not find this increase in popularity unusual. With its amazing streets and beautiful landscapes, which is popular. Lisbon, Europe’s sunniest capital, is seen as a great weekend getaway for Europeans as well as a great holiday destination for people from all over the world. Lisbon is actually very similar to Istanbul: it’s a city of seven hills, has a bridge, and it conveys history in a modern way. So, what should you do in Lisbon?

Important: I think renting a car is ideal for the day you go to Sintra and especially the beach.

Get on the ‘Tuk Tuk’ 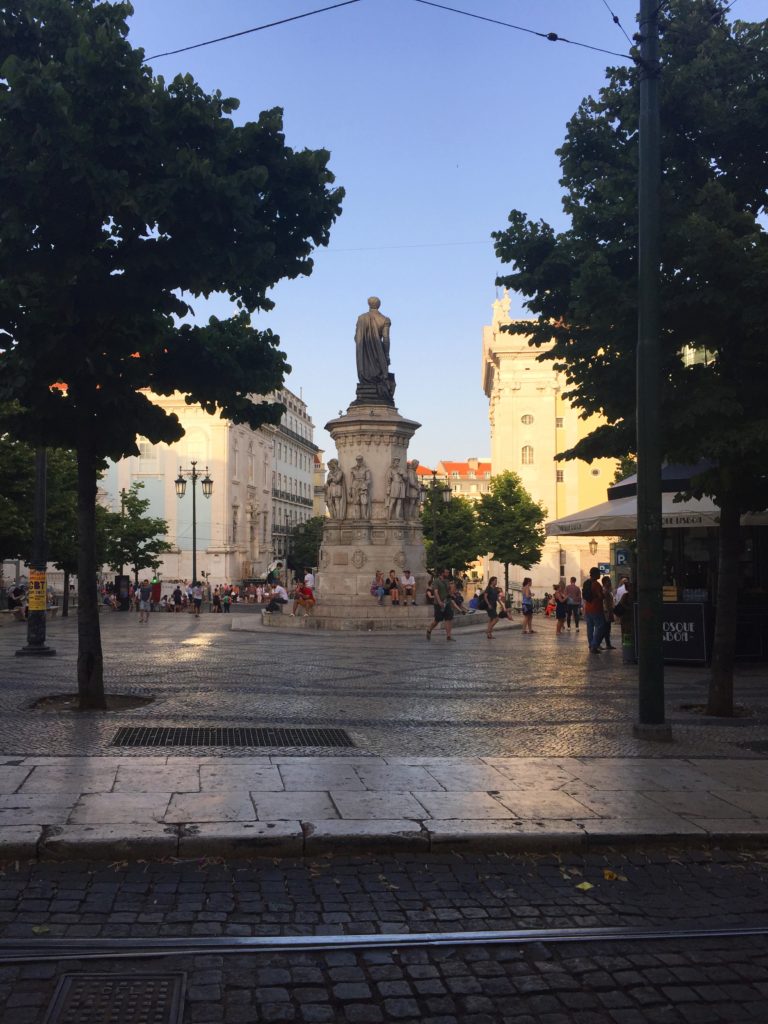 After you get on the plane in the morning and after you settle in a bit (I think Chiado is a great place to stay in because of the wide range of shops around it), you can have lunch in one of the restaurants you find in Chiado. After lunch, eat an ice cream at the famous Santini,  I suggest that you try Lemon & Raspberry and Cascais 2018, they are my favorites.

Spend the rest of your afternoon in Chiado’s shops. If I compare Chiado to a place in Istanbul, it would be Nişantaşı. Do not forget to visit the world’s oldest bookstore, Bertrand (opened in 1732). In the evening go to one of the many different-themed restaurants of Jose Avillez, a famous Portuguese chef, he has many restaurants in Chiado. (joseavillez.pt/en/) Make your reservations as early as possible, especially if you are going in the summer because Portugal can become very crowded. About one of these restaurants, Pizzaria Lisboa, our readers said:

The pizzas in Pizzaria Lisboa were very nice. They were crispy and their dough was thin.

Since I went to many of Avillez’s restaurants, I can definitely say that I recommend it. 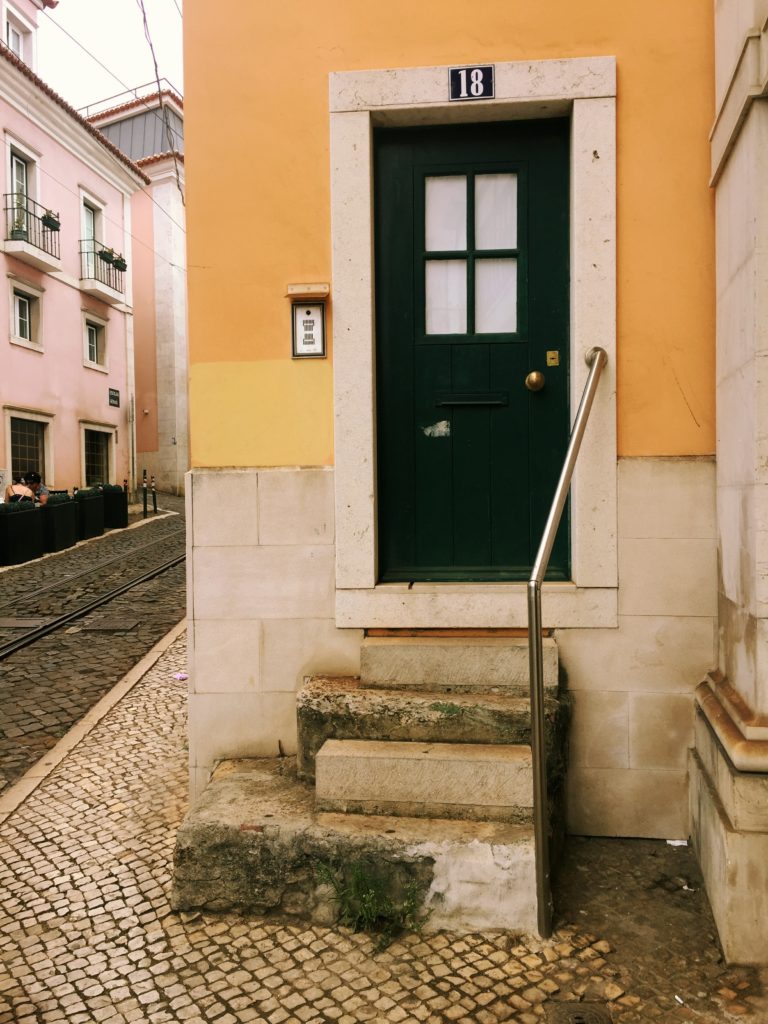 Alfama, known as the historic district of Lisbon, is a bit hilly, so it will be easier for you to start in Alfama than inside the city rather than next to the Tagus River. You started walking. As you walk down, to see the spectacular views of the city, watch out for the signs that say Miradouro. These are places of observation.

It is ideal to go to Alfama on Tuesdays or Saturdays because there is a flea market on the streets of Campo de Santa Clara these days, known as the Feira da Ladra. Near the flea market is an amazing sandwich shop called Focaccia in Giro, and close to it is the National Pantheon, where (after enjoying its spectacular architecture) there is a great view of Lisbon. Afterwards, digest Alfama’s architecture from the narrow, cobblestoned streets. In the evening, you can go to the Sea Me, a fish restaurant in Chiado. 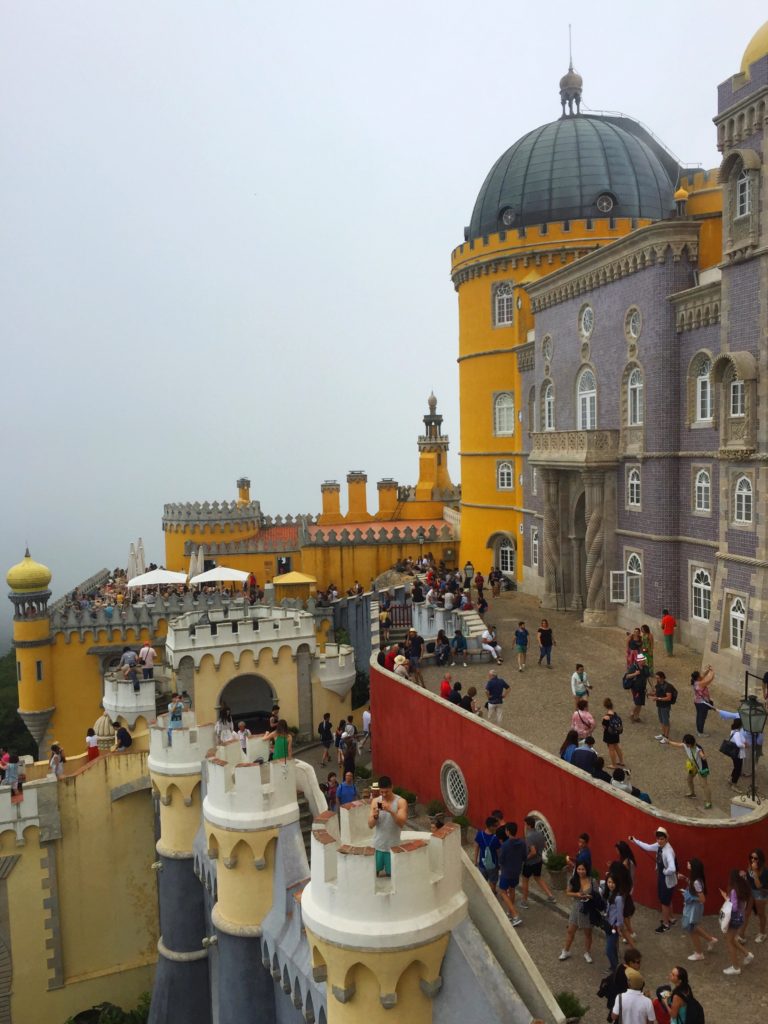 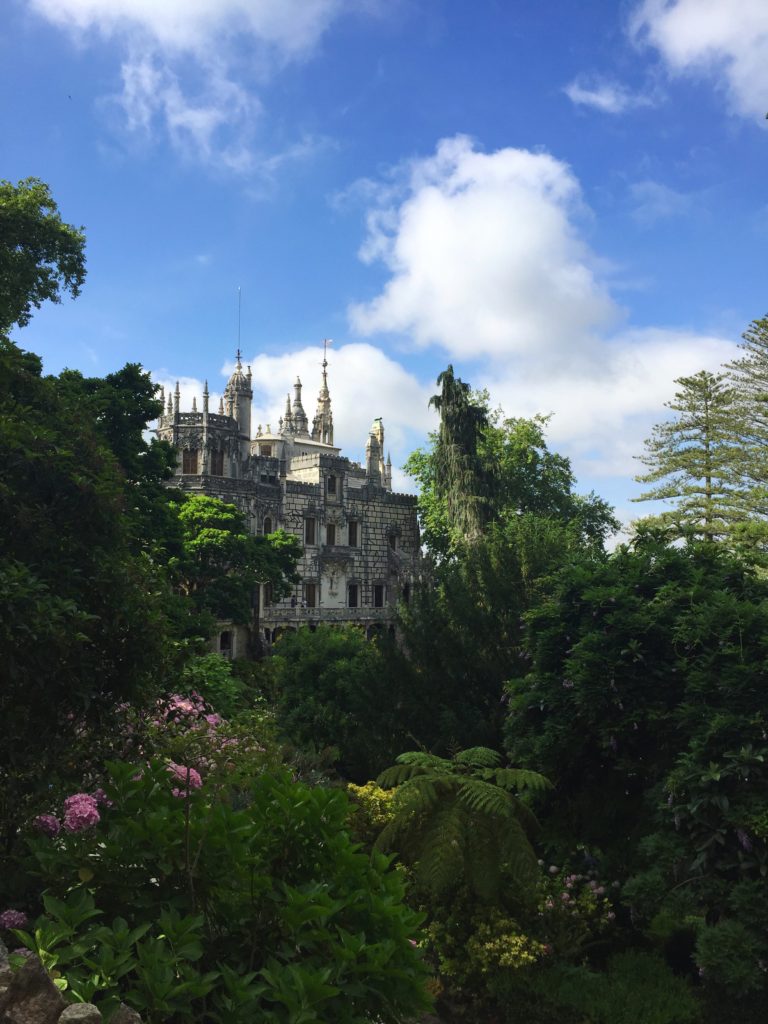 Sintra is a town on the UNESCO world heritage list and 50 minutes away from Lisbon. You will have to manage time very well to thoroughly tour all the castles that seem like they have come out of the fairytale.

The first place you should visit is Pena Palace. The Pena Palace was once the holiday home of the Portuguese kings. I’m having a hard time describing this palace because I feel like words aren’t enough to express its beauty. So here is what one of our readers said:

I felt like I was in a Disney Castle when I was at Pena Palace.

If you return without seeing the colorful Pena Palace, you will miss a lot.

Immediately we go to Moorish Castle, near Pena Palace. It may be a little tiring to visit – if you are tired or have a disability, skip it – but you will really enjoy it. You can look around and see Sintra from a birdseye view until you get to the top.

Also, if you have more time, go to Quinta and Regliera. There is a place called ‘Initiation Well’, which I was very interested in. It is a bit difficult to find but I was very pleased when I finally did. I would also recommend visiting the Sintra National Palace. If you want to eat a long lunch, go to the Tivoli Hotel. In short, there is so much to do and see in Sintra, your timing has to be very well. 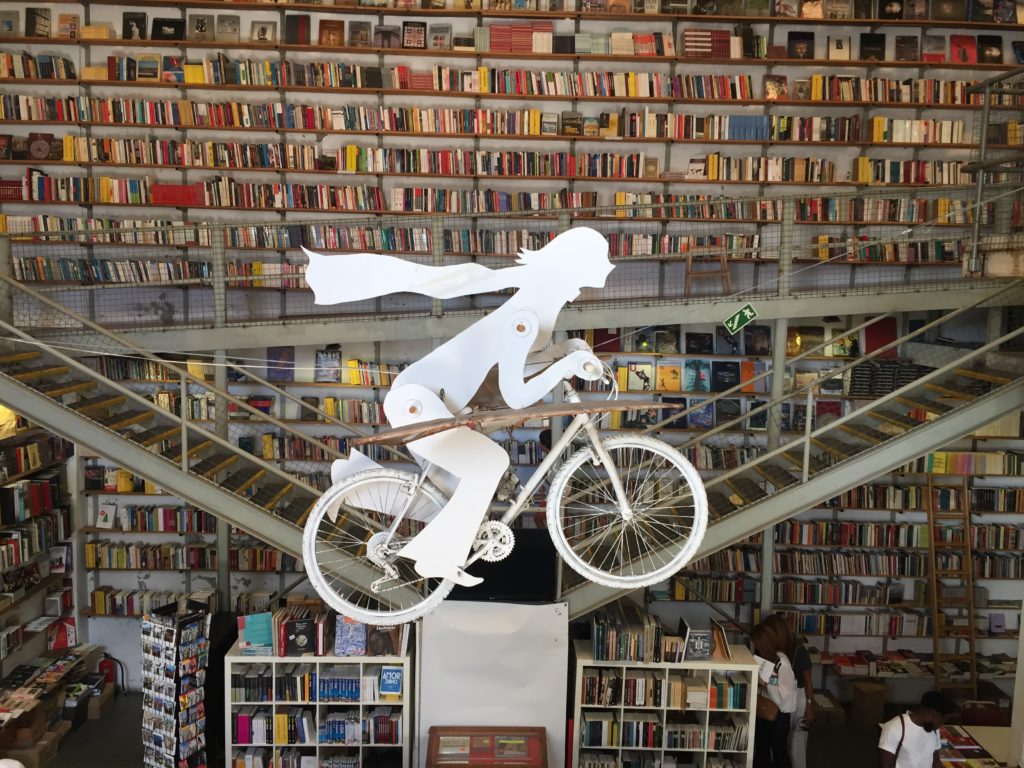 A bookshop in LX Factory

Calouste Gulbenkian Museum exhibits his personal collection of 6440 pieces and also has modern collections, a place to definitely go for all art lovers. I would also visit the magazine shop Under the Cover, which is located near Gulbenkian. There you can find many interesting magazines. If you are a shopaholic, you can go to the department store called ‘El Corte Ingles’ which is also within walking distance.

After lunch, go to LX Factory. The name is very odd; you are right there but the place itself is also odd. LX Factory is described as an ‘island’ of creative people. It’s a bit confusing, so let me tell you the truth: LX Factory is an area, two streets. There are stores selling lots of creative and interesting stuff. There are also a few galleries, cafes and restaurants. You could easily spend an afternoon in LX Factory. 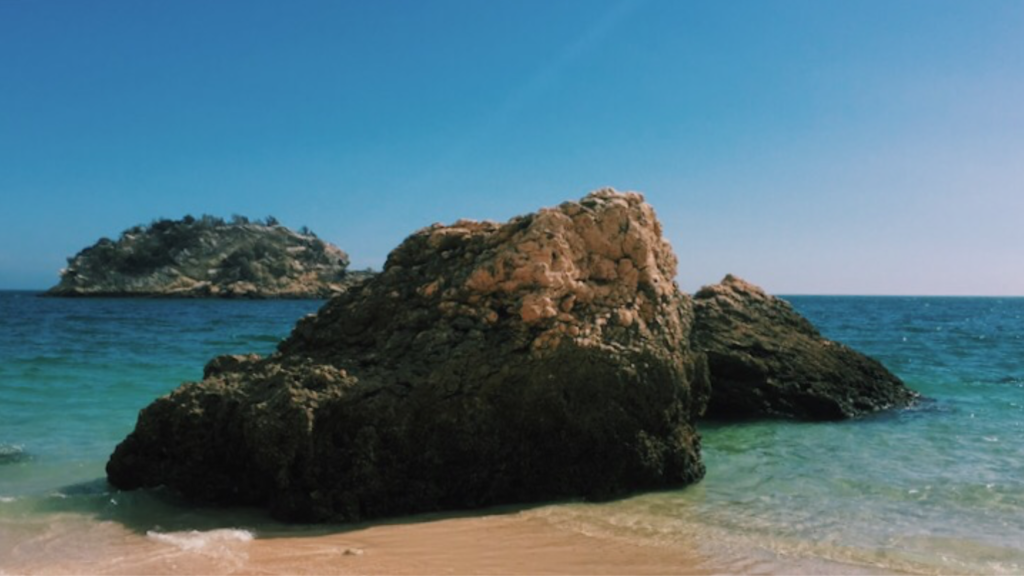 The most beautiful beaches in Portugal are actually located in the south, but there are also wonderful beaches close to Lisbon. Of course, these beaches are not for swimming, they are very wavy. Surfing, windsurfing can be done but I just like to go into the sea up to my knees and wait for the waves to hit me.

Arrabida Park, an hour away from Lisbon, is a magnificent natural park with beaches in it. The sea is like ice, 18-19 degrees throughout the year (due to the mountainous nature of Arrabida), but it is worth going for its nature. When you first get to the beaches it is very nice, but it can be very crowded. Of course, depending on when you go, but in every case, we have a solution for you: you are at the beach, huge but very crowded. If you walk to the left you will see huge rocks by the sea. If you go through those rocks, you will find beaches that are smaller, more deserted but maybe even better than the actual beach. I did this and spent time in a gorgeous, desolate, tiny beach. When I looked at my application from my phone, the beach was called Praia do Monte Branco, but it would be easier to look for ‘Praias da Arrabida’ when you go. (Warning: There is a risk of rock falling from the mountain behind the tiny beaches I mentioned, do not risk it in crowded beaches)

Belem is a place we can call Lisbon’s museum district because it houses a lot of beautiful and interesting museums. You can start by eating some Pasteis de Belem in the huge ‘Pasteis de Belem’ pastry, which everyone loves very much all day long (even if it is the same as Pasteis de Nata). Belem Tower and Jeronimos Monastery in Belem are on the UNESCO World Heritage List and every year people from all over the world are welcomed. Immediately opposite the monastery is the Monument of Discoveries. I would recommend you go to a few of the museums after you have visited these three things. I would also recommend you go to ‘Tropical Garden’ when you are at Belem.

My favorite museum in Belem is MAAT Museum. If you like modern museums you should definitely go; if you don’t MAAT is the museum that will make you love them. There are moving artworks, interesting videos and minimalistic pieces in it that really make you think. There is also an electrical museum connected to the MAAT Museum, which used to be an electrical factory. (tickets can be purchased for two at the same time) It is also a very interesting museum. You would have shot two birds with a stone. Our readers told us about MAAT Museum:

The view at the top of the MAAT Museum was very beautiful. The contents were very beautiful, of course, there were really original works. There were also many different machines in the electrical museum connected to MAAT Museum.

In the morning, you get the last dessert from Manteigaria, which, according to me, makes the most beautiful Pasteis de Nata. you can take a walk on the edge of the Tagus River according to what time your flight is. If you have another thing you want to buy, this is the time to do it.