The 22nd Istanbul Theatre Festival took place between 17 November and 4 December. Of course, I had to watch some plays included. We should watch it while we can, right? I liked almost every play I watched, including the dance performances that were held dear this year. I would like to mention some of the plays I liked.

I was looking forward to this performance because I had heard several times that they were very successful as a group. I can say that the performance didn’t fail my expectations.

The performance was much different from any other I have ever watched. Music and dance contributed to the expression of the relationships between characters. There were compositions which I have never heard before, alongside well known Chopin classics. The musical diversity was very well blended.

The third part of the performance constructed of four parts, “The Statement”, was my favorite. It was one of the most unique performances I have ever watched. The dance moves were very expressive. Performers’ interaction with the table made it even more expressive. Although it wasn’t live, what we heard from the speakers were expressed better than any other conversation.

BGST’s play Artık Bir Davan Var (Now You Have a Case) was one of my favorites. The play that was written by Cüneyt Yalaz and İlker Yasin Keskin was a very accurate representation of the modern world.

The play that made fun of the modern justice system made people laugh and think at the same time. Melek’s (Angel) attitude toward her brother’s inaction was portrayed successfully. This inaction was something we can witness in our daily lives just like the malfunction of justice.

I believe the constantly changing roles of the five actors was what kept the play interesting to watch. Decors and costumes were simple yet effective. The plot, the portrayal of it, and the acting were all amazing. 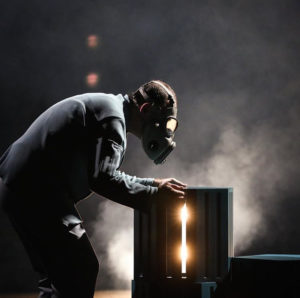 Alarme was the first performance of Theodoros Terzopoulos’ trilogy. It focused on Queen Elizabeth I and Mary Stuarts’ conflict. This was one of the main reasons why I wanted to watch this.

When the lights went off I faced a very unique experimental performance. I can say that it was very impressive from the fact that the narrator stayed frozen for so long and the constant argument between Elizabeth (Sophia Hill) and Mary Stuart (Aglaia Pappa).

Especially the usage of light we witnessed at the end was very impressive. The red light created a breathtaking scene by making it impossible to tell apart the two women’s bodies from each other. Alarme was definitely not a waste of my time.

In the play, Mironov became eleven characters of Hamlet in Hamlet’s conscience. Watching Mironov as different characters was very interesting. His acting was very successful and impressive since we got to see him act out many different personalities.

My favorite thing about the play was definitely the decor. The cube that was constantly moving portrayed several settings throughout the play. Due to this reason, we should thank many people other than Evgeny Mironov, starting by Robert Lepage.

The fact that dance and experimental performances were included in the festival made it a lot more diverse. This year’s festival was one in which I liked most of the plays that I have watched.