It’s 12:26 on a Sunday. October 28th to be exact. I walk into an Italian restaurant called  Olio é Piu in Greenwich Village, New York, looking for a familiar-ish face that I had only seen on her Instagram page before… I look around the restaurant, searching for her.

Now you might be asking yourself, who is Zeynep Güngör? Unless she referred you here, it’s quite normal that you have no idea. But I’m sure you’ll leave this article discovering the many shades of her personality which are as colorful as her designs. 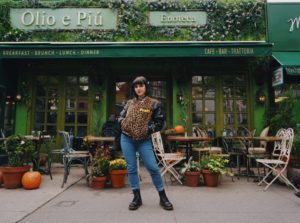 At Olio e Piu, a restaurant she picked, she orders risotto and recommends that I try one of their pizzas. I get one. “I’m obsessively addicted to food,” she says. She tries to cook every day. Working with different meats, vegetables, experimenting… “I’ve been in the kitchen since I’ve been able to hold a spoon,” she adds.

Zeynep studied at Hisar School in Istanbul. After graduating she went on to study graphic design at Pratt, a prestigious art school in New York. From a young age, she was always cutting letters from magazines and newspapers. Zeynep always knew she wanted to study art, she decided that graphic design was right for her around the age of  15.

Pratt wasn’t exactly what she expected it to be. “I was expecting it to be art, art, art – nonstop. I thought it would be like the Olympics and I wouldn’t be able to catch up.” While Zeynep turned in ten-page long essays, she noticed that others turned in half a page.

“What I learned the most at Pratt was how to change my attitude,” says Zeynep. She points out that it’s one of the most important qualities for advertisement, the sector she works in: “it’s completely about the colors and adjusting yourself according to them.”

Zeynep, who currently works as a graphic designer in McCann’s Microsoft in New York, says that the way she studied slightly changed in America:

“The way we were taught was very different in Turkey […] There, how much they think you study depended on how much you suffer. Whereas here if you find an idea, completely concept-based, you can talk through it. Actually doing the work is the second step.” Despite all this, Zeynep finds Pratt much more technical than other design schools.

Zeynep’s designs usually require a lot of hard work. That’s why she felt a bit alone in a school where “students were praised for drawing a black square on half a page:”

“That’s also nice, I like the anti-design movement but it’s not my thing. We’re a big family, a part of it from Greece, a part of it from Iran, Syria, Morocco. I grew up with dance, music, and colors. […] I don’t want to ignore my culture and say ‘I want to design like that.’ The futuristic, minimalistic work done and worshiped by Europeans doesn’t reflect our culture. We come from a different area. That’s why I refused to do that.”

During her third year at Pratt, she started to wonder if she was making the right choices. Her style was very different from the other students and a lot of people told her to change it since it was “outdated.” It was exactly that year, the year she had the ‘Junior Survey,’ where every junior in the school presents their work in front of professors and industry professionals. Zeynep didn’t care too much about the presentation.

At that time, she used to work making posters for the school. Her boss sent her a message in the middle of class, saying she had the highest marks in the Junior Survey, making her first of her class. Zeynep thought it was a joke at first, but when she went back to the office, everyone was congratulating her.

“If I had changed my mind and designed like everyone else I wouldn’t be where I am today. Stubbornness is what brought me here. So I’m going to keep on being stubborn.”

“The theme of my life is stubbornness.”

After Zeynep got the results, she felt confident with work once again. So Zeynep applied for a scholarship competition for minority students, that she had made a poster of, and that she thought she wouldn’t have a chance in because she’s not in one of the first groups that come to peoples minds when they hear the word “minority.” She finished the project 30 minutes before the deadline. She got the scholarship and an internship at McCann, a famous advertisement agency.

She said this about advertising: “It’s like a video game… a job that requires extreme speed and energy.” Zeynep has to design for a diverse group of people. “I design the ads you never get to see because of ad-block,” she explains. In a big company like Microsoft, there are, of course, many restrictions to the designs:

“Creativity, concept, and the writing we’re supposed to include are given to us. Design is a tool to bring them to life. We are the connection between the customers and the company. It’s a job for the mad, really! We get corrections like 30 times a day.” Although she thinks it’s not suitable for many people, she loves her job.

Especially in 2016 after the presidential election that resulted in Donald Trump’s victory, Zeynep started to think more and more about immigrants. She was sick and tired of everyone talking about immigration stories “like they were some kind of Aladdin fairy tale,” she wanted these stories to be told in the purest form possible. That’s why, in her last year of Pratt, she decided to do her thesis project on immigrants. She called the project ‘Hayırlısı be Gülüm,’ a common Turkish phrase that translates to ‘let’s hope for the best, my rose.’

She didn’t really have a formula at first for conducting interviews. She knew that immigration was hard to describe. First, she asked them to share songs that reminded them of the process. She proceeded by asking them to give her 20-25 words about their journey, in any language they wanted. They then proceeded to talk about the words. Zeynep tried to use all our senses in the project. Smell, taste…

And where did she people to interview? She first started with someone she knew. One of her friends. But most of them came from websites like reddit, tumblr, and craigslist. She also included her mom and herself in the project, to put in at least one familiar name to make it more real.

She prepared a small booklet with each person that she interviewed: “We decided on everything together: from the colors to the fonts, to how we stitched the booklet. Everything was printed on my 75 dollar printer at home.” Zeynep gave a copy to each person (except for her mom, who, “for some reason,” didn’t want one) and also kept one of each.

“It was an extremely homemade project, I say it was like making jam.”

When she presented her thesis project ‘Hayırlısı be Gülüm’ one-on-one to her professor, the professor cried, getting particularly emotional in the parts about Zeynep and her mom. And what did her class think? Half thought that this wasn’t Zeynep’s work, that it wasn’t an academic project, while the other half loved it.

“We are only messengers. I found that in this project. That attitude. Finally I’m doing something good for people. I’m in the corner, translating for people.”

‘Hayırlısı be Gülüm,’ which you can find on Zeynep’s website, isn’t finished yet. She wants it to be her ‘life project.’  She wants people to know she’s open to talking to them. She hopes that immigrants keep on talking to her, that this project gets bigger and bigger, that instead of 10, they’ll be 50 people. And hopefully that her own part will be very small.

“I want to make people feel like they are not alone. But unfortunately everyone feels that way. Especially immigrants.”

In the future, Zeynep wants to move to higher positions in her job, in order to be able to share her ideas and beliefs more convincingly. “I always share them, but my ability to turn them into action will increase as my position gets higher,” she explains.

Zeynep, for now, is thinking of staying in New York. She feels close to the creative atmosphere of the city, how New Yorkers act and how they treat creative people. She believes there are many people who think like her in the city, many people who miss home and feel like a stranger. She wants to show them that they are not alone.

After tea, we get up. Zeynep has to return to her home in Brooklyn, which she shares with three of her friends. Her friends describe her as determined, imaginative, and quick-witted. She feels lucky to have them considering some people have “nightmare” stories with their roommates,

What stood out to me most about Zeynep was how frank she was. She mentioned many times that she felt free in New York – maybe it had something to do with that.

And being STUBBORN. Scholarships at Hisar and Pratt, not giving up on her ideas and beliefs, winning competitions, graduating Pratt as an honor student, doing an emotional project on immigrants with strangers that she met in places like craigslist, it’s all stubbornness. Not listening to others. Writing your own destiny.

But she must be doing something right. Because she managed to reach tens, hundreds, maybe thousands of people with her creativity and designs in a city as big as New York, not even mentioning how many people her work in Microsoft has reached. And it’s not only New York – she’s reached us, and now she has reached you.

As 9 Magazine, we are very excited to see what Zeynep will accomplish in the future.

Thank you Zeynep, I hope we meet again soon.

An Interview with Rhiannon Johanna, the Mind Behind Seeker Poetry